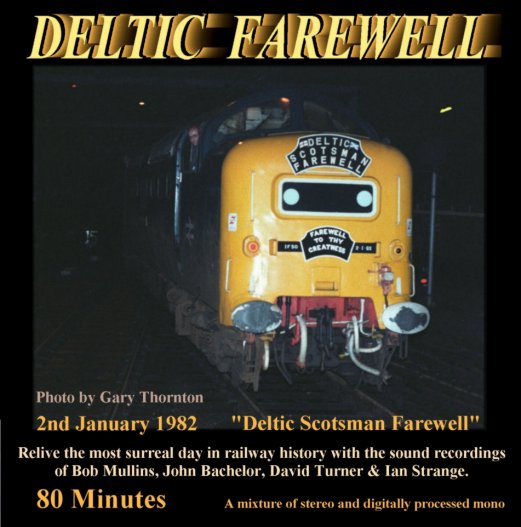 Relive the most surreal day in British railway history, through the recordings of John Bachelor, Bob Mullins, Ian Strange and David Turner. Restored and published by Ian Strange.

A mixture of stereo recordings and mono recordings digitally enhanced with an added pseudo-stereo effect.
Re-mastered again in 2016 for better quality and extended to 80 minutes.

From starting up 55015 in Finsbury Park Depot in the early morning, to the final light engine run of 55022 out of Kings Cross at night.

Highlights include:
*** 55015 passing Finsbury Park depot (from the lineside).
*** 55022 roaring away from Edinburgh.
*** 55022 signal-checked at Peterborough.
*** Triumphant arrival at "The Cross".
*** Crowd chanting, horns blasting and engines repeatedly starting...

Crowd scenes at Kings Cross in the evening.

5* - a) Onboard the train at Kings Cross awaiting departure watched by TV news camera-crews. Passengers discuss the "riot" that might occur once the tour returns to London! The steam heating is then turned on.
b) Sound-recordists/photographers negotiate for window space. (RM)

6* - At 0831 Tulyar gets the tour underway. A grumpy BR man shouts some negative comments, thus getting my vote as dozy-muffin of the day (please excuse my strong language!). 55015 opens up in Gasworks Tunnel with its trailing load of 12 mark 1s. In the damp conditions the wheels slip a couple of times after emerging into the open. We roar through Copenhagen Tunnel and the wheels slip again as we re-emerge. Then it’s roaring Napiers all the way as we pass Finsbury Park TMD with horns sounding. (RM)

7 - At the lineside, 55015 passes Finsbury Park TMD where staff had turned out to pay their last respects. Staff and friends discuss the sadness of the occasion. (DT)

11* - a) With 55022 now at the head of the train, a huge crowd watches as the tour departs at 1432. With emotions already running high, there is much cheering as we pass through Calton Tunnel before no.22 opens up and roars into the fading daylight.
b) 55022 picks up speed again. (RM)

12* - We thread our way into Newcastle as passengers bellow from windows. During a pause for a crew change, there is shouting from both the train and the platforms, which were packed with enthusiasts. We are quickly on our way again, 55022 tip-toeing over the junctions before opening up. (RM)

13* - More bellowing from windows as the tour departs Doncaster. 55022’s wheels slip briefly as power builds up. Chains can be heard rattling in the guard’s van as we gather speed. (RM)

15* - 55022 on the approach to Peterborough. Power is shut off as the driver sights a double-yellow and the brakes are applied. Rolling slowly up to the station, passengers shout from the windows. 55009 is noticed performing its duty as standby loco for the day. A station announcement is made for the York service that had been allowed to cross our path over to platform 3, its brakes squeaking as it comes to a halt. At 1906hrs our signal clears and power is re-applied. As the trailing engine picks up, power is lost, but only briefly, before roaring on our way southwards. (JB)

16 - a) At Peterborough, 55009 leaves the sidings and enters platform 2.
b) Station staff shout at photographers who had climbed down onto the tracks, and 55009 sets off northwards. (IS)

17* - A failed signal had brought us to a stop near Stevenage and the air-compressors can be heard whining. 55022 then gets the tour moving again. Our driver is determined to make up for the time lost. (RM)

18* - The final minutes of the railtour and we plunge into Gasworks Tunnel just after 2000hrs. The highly-strung crowd shout and whistle from windows and a big cheer goes up as we emerge into Kings Cross. The horns sound from both ends of 55022 until we come to rest in platform 2 greeted by another big crowd plus TV cameras. We alight from the train and 55022’s engines are shut down. (RM)

19 - Horns are sounded at both ends of 55022 to cheers and chants from the crowd. 3 cheers are given to the drivers. See photo below. (JB)

22 - The driver repeatedly starts up and shuts down one of 55022's engines, playing to the emotional crowd. (JB)

23 - As the Deltic's horns sound again, an HST arriving at platform 3 also sounds its horns and is booed by the crowd! (JB)

24 - After the coaching stock had been removed, 55022's engines are re-started ready for its final departure light engine. (JB)

25 - Recorded from platform 2 from approx. 2045hrs. All 4 horns on 55022 sound as it begins a very slow light-engine movement along the platform towards us. The crowd is pressing against the bodyside and holding onto to its nameplate, reluctant to let the Deltic go and wanting these last few moments of the Deltic era to linger. The microphone is moved up along the platform ahead of the Deltic. After reaching the platform end, the Deltic pauses alongside while the emotional fans stand back allowing Royal Scots Grey to set off, horns blaring, crowd cheering and applauding (see cover photo). Then there is silence... (JB)