As originally built, Deltics had a straight-air brake system for the locomotive brakes, plus vacuum for the rolling stock. Air for the brakes and auxiliaries was supplied by a single compressor (Worthington-Simpson) in no.2 nose end. During 1967/68, the Deltic fleet was converted to dual-braking for handling air-braked coaching stock. Therefore, a pair of air-compressors (Davies & Metcalfe Ltd.) replaced the original unit. Vacuum is supplied by a pair of exhausters in no.1 nose end. 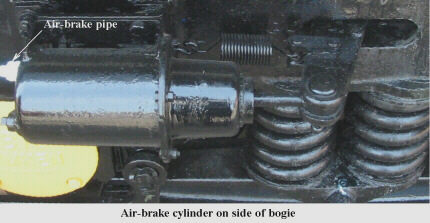 After conversion to dual-braking, an air-brake distributor helped to look after the issue of applying vacuum or air-brakes for the coaching stock, along with the loco's own brakes.

Air was used for the horns (not surpringly!), windscreen-wipers, water pick-up scoop and sanding gear. The last 2 of those items were subsequently removed from the fleet. Vacuum was used, originally, for the Automatic Warning System (AWS) and Deadman's Safety Devices (DSD), but these changed to air operation (not much difference in practice) after the dual-braking modifications.

Photo by the author.