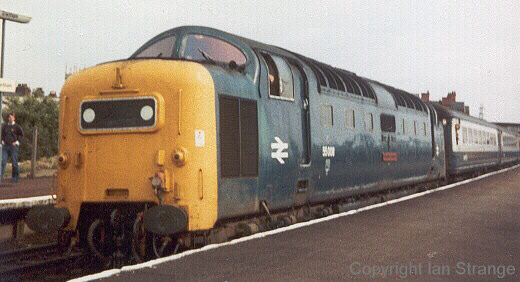 Apart from creating a barrier between the loco's contents, and the outside elements, the bodywork supports the weight of a number of major and minor components (including radiators, fan-drives, exhaust silencers). These loads are transmitted via the body to the underframe, partly through the bodysides and partly with the assistance of pillars inside the loco. Note that the body's contribution to the stiffness of the underframe is negligable. See Appendix 1 below for more technical details.

A challenge for the designers was to create a loco body big enough to house a large quantity of installed equipment, but still able to satisfy loading-gauge restrictions. Allowance has to be made for movements of the body on its springing, as well as negotiating tight curves without the noses exceeding the loading gauge (due to end-throw).

The bodysides are tapered along the cab and nose section, so that the nose will remain inside a 9 feet wide loading gauge on curves as tight as about 5 chains (330 feet). The bodysides are also slightly inclined, making the loco narrower at cantrail level. The widest part is just above the tumble-home. This allows for movement of the super-structure on its springing (body roll). This means that the bodyside taper is greatest just above tumble-home level, and slightly less at cabside window level. The cab roof also tapers slightly, using a conicle curve with the coning axis inclined so that the roof taper and bodyside tapers can meet (and some people think these diesel bodies are simple boxes!). 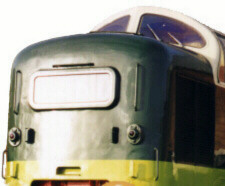 On a long train, the locomotive's contribution to air-resistance is a fairly small proportion, but every little helps! The coefficient of air resistance for a loco with a completely flat front and sharp edges, is approx. 1.0. A more rounded shape for the front end can get this figure down to 0.5 (ref. 1). Deltics manage about 0.56, as calculated from loco resistance data measured on the Prototype Deltic (ref. 2). Deltics are fortunate enough to have compound curves on the nose end and deep bodysides which no doubt helped to provide good figures. The above figures are based on calculations using imperial measurements, feet, pounds-force, and miles per hour. In practise, the problems of pressure waves of air disturbed by the fast moving loco, are more important than drag. 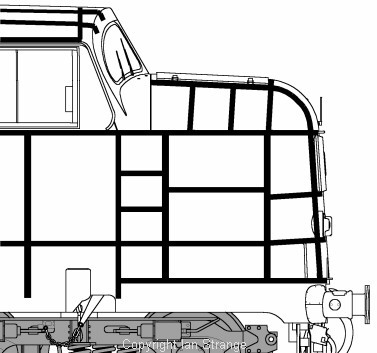 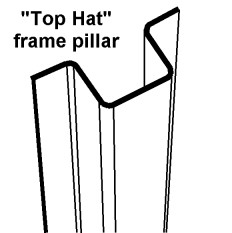 The body framework is largely built up from channel and "top-hat" sections. The flanges of the "top-hat" sections allow the outer panelling to be welded on securely. COR-TEN steel is employed (ref. 3), permitting lighter sections. That is, COR-TEN's higher yield strength and corrosion resistance (see Appendix 2 below for more details) means that thinner gauge material could be used, with a saving of weight. 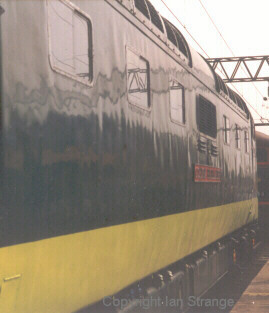 Deltic bodies were panelled in relatively thin 16 gauge (0.064") COR-TEN steel sheet (ref. 4), again permitting a saving of weight over conventional mild steel panelling. This gave Deltics their characteristic wrinkled appearance, often betraying the welding processes used (the apparent dashed lines in the panelling shows the intermittent welding between the backs of panels and the frame). The engine-room sides were made up from 8 different shapes of panel, with one panel duplicated on each bodyside, so that made 9 panels per side (ref. 4). A larger number of panels made up the cab and nose regions, because of the complexity of the shape.

Panels had continuous welds around their outer edges, where they met adjacent panels and the frame. They were also plug-welded to those same frame members (i.e. holes were cut through the panels and then welded up over the frame). Where framework crossed behind panels, intermittent welds were used, as referred to earlier.

The bodysides along the cabs and engine rooms were double-skinned, with Anozote sound insulating slabs in the cavities.

The curved cabside windows were manufactured by Kellet from Perspex (a type of acrylic). The engine room windows were by Beclawat. Winscreen glass was laminated "Therglass" with heating elements between the glass layers. Cab doors were made from fibre-glass, i.e. glass fibre matting bonded in resin. This is convenient for moulding into the required curvatures, and for a saving in weight.

Note that the body does not make any significant contribution to the stiffness of the underframe. More modern types of construction (e.g. class 47) allow thin body panelling to contribute to overall stiffness. For that to work, the panels need to be aligned with the forces that they resist. That is, flat vertical bodyside panels can resist vertical bending, if the body is designed with this in mind (any buckling of the panel will lose its alignment with the forces). On a Deltic, the curvature of the tumble-home prevents the side panels (and framework) from contributing any more than a tiny fraction to the underframe's rigidity. Those areas of bodyside that are flat, are also broken up by apertures for windows, grills and hatches.

This body was designed to give the required strength and stiffness to support certain components, and to transmit these loads to the underframe. English Electric were very experienced at diesel loco building by the time Deltics were under-going design, but so-called stressed body design development was still in its infantsy.

For my own rough calculations (leading to conclusions stated above), I used the basic formulae for bending moments, deflection and stiffness. Stiffness, measured in pounds-force per inch of deflection (at point of largest deflection), is calculated from the series of equations:

Where E = Young's Modulus of Elasticity (approx. 30 million pounds per square inch for most steels).
I = Second Moment of Area (often referred to as "Moments of Inertia", something of a misnomer) of the cross-section of the component under analysis. Measured in inches raised to the 4th power.
k = a constant, dependent upon the way the component is loaded (e.g. evenly distributed load or a concentrated load) and also how the component is supported. k=48 for a freely supported beam with a central load. k=76.8 for a freely supported beam with an evenly distributed load. For a beam rigidly fixed at both ends, k=192 for a central load and k=384 for an even load.
l = length of component between supports (inches).

The COR-TEN steel employed on Deltics later became known as "COR-TEN A", after the introduction of "COR-TEN B" developed for thicker sections. It is an alloy steel with a lower carbon content than conventional alloy steels, to keep the ease of welding comparable with mild steel. It's ultimate tensile strength is similar to mild steel, but its yield strength is significantly higher (40-50% higher depending on what type of mild steel it is compared to). Yield strength is the stress at which plastic (i.e. permanent) deformation starts to occur (think Plasticine!). This property is often more important than ultimate strength, since when part of a structure yields, it re-distributes the loads and more of the structure progressively yields (helping to avoid complete fracture).

COR-TEN also has high resistance to corrosion, by the formation of a protective oxide layer when it comes into contact with water and then dries out (provided that it is not frequently abraded).

COR-TEN« is a registered trademark of United States Steel Corporation.

All photos and illustrations by the author.