Reports of bogie frame problems early in the service lives of the production Deltics, masked the fact that the basic design was of exceptionally high merit. It was a development of the Prototype Deltic's bogie, and the production version was adopted for the class 37 also. The design centres around the primary suspension, that is, the springing between the wheels and the bogie frame (secondary suspension being between the bogie frame and loco super-structure).

The are a couple of major challenges for primary suspension design. Firstly, when running over rail-joints, the bogie pitches and this can turn into vibrations when the loco is travelling at certain speeds. That is, just as the bogie is bouncing back, it encounters another rail joint and so the oscillations resonate. Secondly, avoiding de-railment is highly desirable!

The Deltic bogie has an equalised primary suspension system, employing 4 pairs of springs resting upon 4 equalising beams. As the name implies, the task of equalising beams is to try and keep the loads carried by the wheels as equal as possible. While the basic principle of this suspension is found on other types of loco, the Deltic's is very compact and light. See Appendix 1 for more details on this suspension design.

The original design of frame was a light-weight fabrication of steel plates, rivetted and welded together. These formed box section side-members and cross-members (transoms and headstocks). Closed box sections (rather than plain girders) provide a high resistance to twisting (torsional stiffness). Joining (by welding) these box section components together at right-angles, into a neat ladder-shaped frame, gives the bogie a high overall torsional stiffness. Substantial plates at the top and bottom of each member, adds to the vertical bending stiffness.

Using separate plates - rather than casting - takes advantage of their inherent strength, so that thickness can be kept down to what is required for stiffness. Hence, weight is saved. Seemed like a good idea... and it was! But at this time, research into metal fatigue was advancing fast, and the great complexity of this subject might explain why the Deltics suffered from so many bogie frame problems early in their lives. In particular the welds, while essential for stiffness, are potential weak points, and welding techniques were to advance in the years following Deltic loco design. See Appendix 3 below, for more data on why this was not so easy to design! 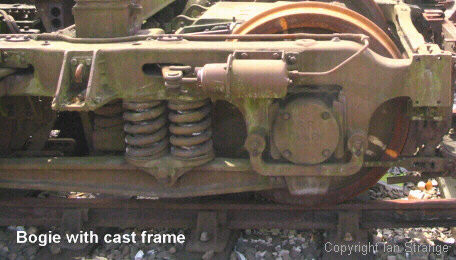 Ultimately, a new cast bogie frame solved these troubles (from 1965) by eliminating many welded joints. The price to pay was a weight penalty.

Like a sports car that needs to keep its tyres in firm contact with the ground for good road-holding, a loco needs to do much the same to minimise the risk of de-railment at speed. Keeping the unsprung mass (wheel-sets, axle-boxes, etc. and part of the traction motor mass) low, in relation to the loco's total mass, helps to achieve this in the higher speed ranges. It also keeps down the punishment inflicted on the trackwork at high speed.

The Deltic's unsprung mass, at 3.3 tons (ref. 1), is low for a diesel electric of its era. The figure for a class 47 is 3.55 tons, and for class 86 it is 4.25 tons. The forces that a wheel imparts to the rail over a dipped rail joint, have been published for various locos running at their maximum service speeds. Figures for a Deltic at 100mph, are virtually the same as for classes 45 and 47 running at 90mph and 95mph respectively. The two peak forces over a dipped joint are known as P1 and P2, and for a Deltic, these were calculated to be 48tons (P1) and 34 tons (P2) (ref. 2). 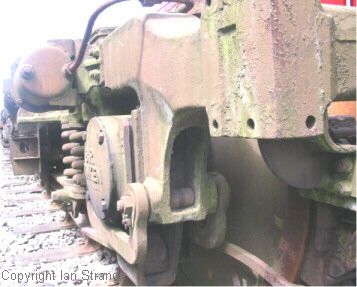 For travelling over jointed track, the equalising beams allow the wheel-sets to rise and fall with a minimum of primary spring movement. Following conventional practice, the primary springing is much stiffer than the secondary springing, to keep the bogies' natural frequency high.

For minimising risk of de-railment, the basic objective is to prevent the load carried by each wheel from becoming dangerously low at any moment. Different countries set out different criteria for what is acceptable. In the U.K. the criteria stated that the load carried by any wheel must not reduce to below 40% of its normal static load, when the vehicle traverses a track twist of 1 in 150 (ref. 3).

In the lower speed ranges, that means keeping the springs sufficiently 'soft', so that any given suspension movement will produce a small change in the weight on each wheel. Having mentioned above the need to keep primary springs stiff, the solution to the problem lies with those equalising beams again (see Appendix 2 below).

One other bonus of this suspension system, is that it keeps the load paths short. That is, the primary springs are close to the secondary springs, so the loads have a short distance to find their way between the two sets of springs.

With equalised suspension, the effective spring rate measured at each wheel, can be much lower (depending on type of suspension movement) than the stiffness of the springs themselves, positioned two-thirds of the way along the equalising beams. This keeps down changes in wheel load (to avoid de-railment), while permitting stiff springs for stability.

A 6 wheeled bogie also presents added problems compared to 4 wheels. If one wheel of a 4 wheeled bogie is jacked up, the change in weight carried by each wheel follows a neat and simple pattern. If the same is done to a conventional 6 wheeled bogie, a lot of weight is lost from one of the centre wheels, and this complicates the whole weight distribution, and the weight transfers can be quite large. The answer to this problem is equalising beams.

With the 4 pairs of springs, this suspension behaves much like a 4 wheeled bogie. If one wheel is jacked up, the weight on the centre wheels does not change, while the remaining 4 wheels experience fairly small changes in load.

In the higher speed ranges, the effects of the various masses of loco parts comes into play. The unsprung mass of wheels, etc. needs to be kept low in relation to the sprung mass of the loco super-structure. Since the Deltics are relatively light overall, it was more important to get that unsprung figure low, to ensure that track-holding remained good at speed. Unsprung mass was 3 tons 6 cwt per axle, which is lighter than on most first generation diesel electrics.

At high speeds, the unsprung mass of the wheel-sets, part of the motors, suspension etc. has to be accelerated up and down very fast. The greater this mass, the greater the fluctuations in weight carried by each wheel. It also helps to have more sprung mass, because this affects the percentage fluctuations in wheel load when traversing uneven track at speed.

Fatigue in this context is the failure by cracking of a component that has been subjected to repeated stresses that are less than its ultimate strength. Indeed, the stresses involved might be far less that which would normally be expected to cause breakage. Early research established figures for the "fatigue strength" for various materials. This being based upon the "stress range" (e.g. if a bogie frame is flexing up and down repeatedly as it runs over uneven track, the direction of the stresses will be continuously reversing. If the stress at one point fluctuates from, say, 4tsi tension, to 4tsi in compression, then the stress range = 8tsi).

Unfortunately, the above only holds true when the loads follow a nice simple pattern. With ever changing random loads (such as on a bogie), predicting fatigue failures is far more complex. What English Electric could have done with was a computer... (ref. 4).

Actual failure of framework (as in complete breakage after a crack has started) is likely to be due to "brittle fracture" (ref. 5). The initial fatigue crack will have placed more stress upon the remainder of the component. With mild steel, a cold night can be sufficient to trigger brittle fracture, as many a class 40 discovered!

Photos and illustrations by the author except where otherwise stated.