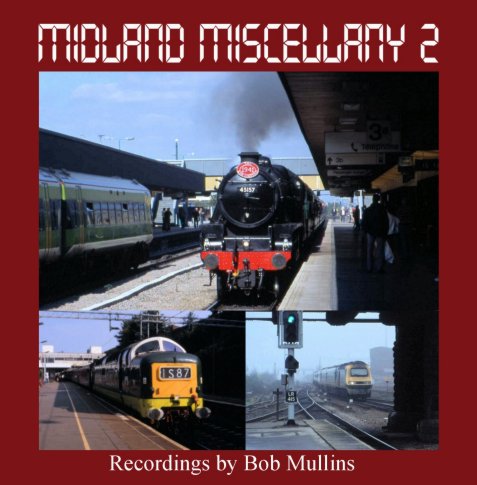 Steam, diesels and electrics on the main line, in the Midlands. Recorded by Bob Mullins. Published by Ian Strange.

Highlights include:
** Deltic blasts away from Coventry station.
** Peak at Leicester.
** Steam and diesel action on the Lickey.

You can download a pdf version of the playlist:
Midland Miscellany 2 playlist PDF

1 - A cock crows just before 55019 “Royal Highland Fusilier” starts up at Bridgnorth prior to working a train back to Kidderminster on the Severn Valley Railway - 14/9/02.

2 - On board a diverted Euston to Wolverhampton train as Virgin “Thunderbird” 57305 “John Tracy” is heard accelerating away from a signal check into New Street South Tunnel and then entering the station. 57305 then departs towards it’s next stop, Sandwell and Dudley - 30/8/03.

3 - D9000 “Royal Scots Grey” arrives from Poole on a Virgin normal service train to Liverpool, it’s distinctive engines booming in the confined space. 47703 standing nearby starts up in readiness to take over whilst D9000 moves off. The 47 then departs with the train - 28/11/98.

4 - On board a Wolverhampton express hauled by 87033 “ Thane of Fife “ as it springs into life and accelerates over the pointwork into New Street North Tunnel. Once inside, the powerful 5,000 hp traction motors can be heard working hard with speed picking up quickly as the train exits and heads towards The Black Country - 14/9/02.

6 - Due to engineering work on the route from Birmingham to Bristol the rare sight of NE/SW HST’s at Banbury were experienced. Here one leans to the curve as it roars through on it‘s way to Didcot where it would join the South Wales Main Line to Bristol- 3/10/98.

7 - The problem with using four coach trains from Brighton to Edinburgh !

8 - Standard Class 5, 73096, raises echoes from the nearby buildings as she makes a strong departure northwards with “The Worcester Standard” from Alton (Hants). Note the sound of the lower quadrant signal arm going back to danger as the train passes - 24/4/99.

10 - With the noise of the old Brush works in the background, 4953 “Pitchford Hall” departs northwards in true GWR fashion with “The Ebor Express” from Tyseley to York - 9/12/06.

11 - A HST roars through bound for St.Pancras, with the resultant wind disturbing an empty drink can - 19/4/97.

18 - After a heavily delayed trip from Stratford-upon-Avon, weary rail tour passengers erupt with resigned laughter at the news of another delay, this time due to cows on the line. Eventually departure south on a normal service train (a HST) takes place and it is heard from onboard accelerating out of Leicester - 24/4/93.

19 - Rain is falling as the level crossing barriers are lowered for 4965 “Rood Ashton Hall” as it makes it’s steady way towards Nuneaton with the “East Midlander“- 24/5/03.

21 - Despite it being a week-day enthusiasts were out in force to see blue liveried 55022 “Royal Scots Grey” depart onto the up mainline with a positioning rail tour from Preston to Euston. It was immediately followed by 66956 on the slow line with a freightliner. A few minutes later, a pair of 86’s make a very pronounced electrical sound as they pass south with another freightliner and a London bound Voyager from Holyhead is slowed on the main , no doubt waiting for RSG to clear the section ahead - 4/3/11.

23 - On a day when Northampton was Euston on the WCML because of extensive engineering works, departure (on board) to the town hauled by 87023 “Polmadie “ was very rare, it being the final stop for the express- 23/8/03.

24 - Outside Wellingborough signalbox on a warm cloudless summer evening. With windows open to let out the summer heat the signalman is heard whistling a very creditable rendition of “Ghost Riders in the Sky”. He fills his kettle in readiness for an evening cuppa and then pulls off a signal for a northbound passenger train. An elderly man enquires of the train’s whereabouts, a HST arrives, a freight passes and the HST then departs - 29/7/83.

25 - A HST passes northwards as gricers bemoan the fact that Jubilee 5690 “ Leander “ was passing on the slow line rather than the fast with the return “Midlander” from St Albans to Tyseley - 8/4/06.

26 - A4, 60009 “Union of South Africa” makes a fine sight as it charges round the bend and heads towards Kettering and her final destination of Barrow Hill with the “Cathedrals Express” from Alton - 19/11/05.

27 - On a bitterly cold day a heritage DMU arrives and then departs for Kettering with workmen busy in the background on the station renovation. Soon after, on board a Nottingham bound express, “Peak” 45 108 departs from Wellingborough and makes steady progress northwards - 5/2/86.

28 - Later on the same very cold February day as in the previous track, snow is falling as 56 083 passes on the slow line with a Redland stone train to Mountsorrel. Workmen are still hard at it as newly built 59 001 then passes north on a light engine test working - 5/2/86.

1 - 58025 which was employed during the week hauling heavy merry go round coal trains, has a Saturday outing to York with “The Cleveland Cleric” where it would come off and a 56 would be put on to take the train to Bishop Auckland. After a quick call and a blast of the horn the train heads northwards- 22/9/01.

2 - With safety valves blowing, 6233 “Duchess of Sutherland” departs northbound with the “Yorkshire Royale” bound for Doncaster and York - 27/11/04.

3 - “Deltic”, 9016 “Gordon Highlander” in pink Porterbrook livery surges through the station and heads northwards with “The Napier Navigator“ from Crewe to York and Scarborough - 6/4/02.

4 - On a cold wet and windy day just after 18.00, 5690 “Leander’s” initial ascent of the bank unaided mingles with the birdsong. Slowly, the roar of the 4-6-0 becomes more pronounced until it is all engrossing as it passes Vigo Bridge about two thirds the way up with a special from Cardiff - 25/3/06.

5 - 60097 “ ABP Port of Grimsby and Immingham” slugs it out up the grade past Vigo Bridge with a train of steel from Margam to Corby assisted by 66056 at the rear. Later, the unmistakable sound of a “Deltic”, 55022 “Royal Scots Grey” (in blue livery) can be heard attacking the climb and eventually passing at much the same speed as the freight - 29/3/08.

6 - 37427 departs with a flourish and heads onto the Leamington line with the “Aggregated Syphons” rail tour to Colnbrook and Ardingly (Haywards Heath) - 12/3/05.

7 - A “Deltic” at Coventry in BR days would have been very rare indeed, however, thanks to Virgin Trains D9000 “Royal Scots Grey” could be seen twice on summer Saturdays in 1998 and 1999 as it powered a normal service train from Birmingham to Ramsgate. Here, D9000 departs towards Birmingham and can be heard accelerating in the distance despite a loudspeaker announcement and a dmu departure. Excited enthusiasts sum up the experience - 29/8/98.

8 - On a cold and cloudy February morning 50015 “ Valiant “ arrives on a service to Liverpool. Once on board and underway, the powerful English Electric engine rasps in the crisp cold air and passes Canley and Tile Hill at speed - 29/2/84.

9 - More memories of the past are evoked as D1015 “Western Champion” arrives on “The Western Yorkian” rail tour from West Ruislip. After a short stop, departure northbound is in true “Western” style - 26/11/05.

12 - On board a “Corbyrail” special to Llandudno with 47459 awaiting departure from Kettering as a ballast train passes. Departure is then made along the slow line towards Glendon Junction and the first stop, Corby - 15/9/85.

13 - Fellow enthusiasts can be heard waiting excitedly for 6233 “Duchess of Sutherland” to arrive on “The Midlander” for a water stop. Later, nearly under cover of darkness and in very cold conditions she is heard storming southwards through Wellingborough, her white exhaust laying a trail in the freezing air - 8/12/01.

20 - 4965 “Rood Ashton Hall” arrives and then departs on a Christmas luncheon circular tour which took in Tamworth, Bardon Hill and Nuneaton before returning to Tyseley and Dorridge- 18/12/04.

21 - D1015 “Western Champion” arrives on “The Western Noon” from Paddington and then departs with the ecs to the carriage sidings which are on the site of the old Worcester shed (85A) -17/8/02.

22 - Standard Class 5, 73096, has arrived earlier on “The Cathedrals Express” from Alton and is swilling out as a DMU departs. The standard moves off to the sidings and one of the lower quadrant signals is heard changing - 25/10/03.

23 - Later, 73096 departs south to Hampshire followed another lower quadrant signal going back to danger after she has passed - 25/10/03.

25 - 46115 “Scots Guardsman“ plus one coach is heard passing through en route to Southall depot in order to be able to work a tour out of St Pancras two days later. The Scot seems to positively romp up the gradient to Hunsbury Hill. - 7/11/14.

26 - 46233 “Duchess of Sutherland” comes under Spencer Bridge and accelerates in the night air towards Rugby with the return working of a PMR Excursion to Derby - 22/11/14.

27 - Another A4, this time 4498 “Bittern” in LNER blue livery, accelerates southwards with the “The Cathedrals Express” from Chester. The three cylinder beat can be heard powering up the climb - 22/11/14.