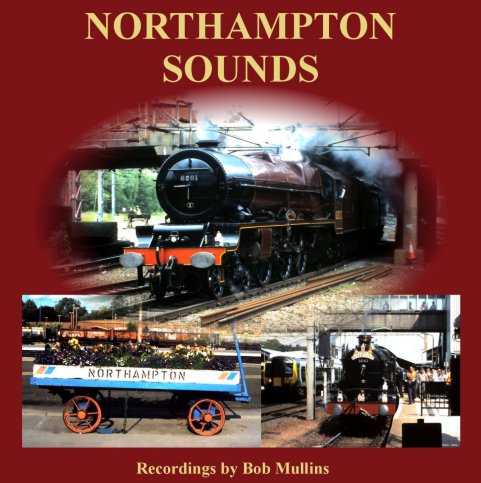 Steam, diesels and electrics on the main line, in and around Northampton. Recorded by Bob Mullins. Published by Ian Strange.

Highlights include:
** Top and tail Deltics on full power on the main line!
** A pair of 37s power a stone train up the grade.
** 71000 departs Northampton.
** An APT-P trundles passed.

You can download a pdf version of the playlist:
Northampton Sounds playlist PDF

3 - At 05.15 am under cover of darkness, a rake of AM10’s (Class 310 emu) approaches platform 2 with an empty coaching stock working, it’s horn echoing in the still night air. As it disappears under Spencer Bridge a green light on signal RY 1022 allows 87 007 “City of Manchester” clear passage on the up through line with “The Nightrider” sleeping car train from Glasgow to Euston via Dumfries. Recorded from another AM10. (24/10/87).
NB: It is ironic that GWR County Class steam loco number 1022 was named County of Northampton and one of the main signals at Northampton is RY 1022.

4 - Early on a Summer’s morning, country sounds abound as Deltic D9000 “ Royal Scots Grey” roars past Banbury Lane level crossing (on the main line about 5 miles west of Northampton) and on towards Blisworth, with the Summer Saturdays Birmingham to Ramsgate train (26/6/99).

5 - APT glides through platform 2 on one of the many proving runs which were undertaken, however, they were all in vain as the project was unfortunately cancelled. Note the rhythm of the articulated coaches (29/1/85). Virgin Pendalino, 390 015 “Virgin Crusader” provides a comparison in tilting train technology as it passes southbound with a FA Cup semi final special from Liverpool to Wembley (14/4/12).

7 - Deltics 55 019 “Royal Highland Fusilier” and D9009 “Alycidon “ (dead at the rear) come under West Bridge and accelerate southbound with the Northern Belle coaching stock for Wembley. NB: Both locos are owned by the Deltic Preservation Society which was started in Northampton in 1977 and this was almost certainly their first visit to the town.
Later the same day at Roade, on the main line 6 miles south of Northampton the train is heard returning. This time, however, it is storming along the main line with both locos working, which is very rare indeed !!!! (30/5/99).

9 - The station clock is showing well after 10pm as Deltic, 9016 “Gordon Highlander” departs south on the final leg of a railtour from Holyhead. Once past West Bridge she really opens up and can be heard accelerating hard over “fifteen arches” and on towards Hunsbury Hill tunnel. Sounds from a nearby disco also add to the Saturday night scene (7/9/02).

10 - Northampton as Euston - For a short period at the end of August 2003, Northampton was used as a railhead for the West Coast Mainline because of major engineering work further south. Two or three Virgin expresses at a time were lined up in the station ready to depart north, something which had not happened before. On board one of those expresses, the 08.45 Northampton to Glasgow Central hauled by Class 86, 86 212 “Preston Guild”, the train manager busily announces the destination stations before the loco threads the pointwork near Victoria Park and picks up speed past Kings Heath and Kingsthorpe (30/8/03).

11 - 25 283 and 25 258 cautiously approach signal RY1022 on the southbound through line with heavy bogie tanks from Stanlow en route to Dalston eventually coming to a stand. After being given the road they accelerate under West Bridge and on towards Hunsbury Hill (15/9/84).

14 - Soon afterwards, 92 009 “Elgar” passes through with a Trafford Park to Wembley freightliner. The sound of the 92’s has earned them the nickname “hairdryers” and this recording illustrates why.

16 - 60 097 “Pillar” is heard powering through platform 2 with empty stone hoppers bound for Derbyshire just as a loud announcement is made about a Euston service (21/3/96).

17 - Heavy freight loco, 56 102, opens up with a short southbound freight under West Bridge and past the many enthusiasts waiting for a steam special (30/6/03).

18 - Day trip to Carmarthen - An announcement is made about the severe delay to the “Valentine Scenic Express” and the need to acquire another loco. Shunter 08 742 then starts up in Castle Yard as if volunteering her services and moves off. Following a decision to miss out the Northampton stop, all the tour passengers from the town joined a normal service to Rugby and received a friendly farewell from the Silverlink guard. At Rugby, replacement loco 47 851 “Traction Magazine” is started up, followed by the arrival of the errant 47 828 which is then detached. and eventually departs for South Wales over three hours late ! (14/2/04).

19 - Ailing Deltic (as if !!!!! )- 47 799 and Deltic 9016 “Gordon Highlander” make a strange combination as they depart south in the dark with “The Yorkshireman” railtour. Although the 47 is powering the train the Deltic is very much alive and raring to go but as it was unable to provide train heating the 47 took charge (12/4/03).

20 - 71000 “Duke of Gloucester” becomes the first steam engine since the mid 1960’s to leave Northampton hauling the “The Lancastrian Express (Children in Need Special)” to Euston (25/11/95). On the next day, it is heard roaring along the main line at Roade bound for Manchester Victoria.

21 - Rain is starting to fall as Standard tank, 80098, accelerates past Martin’s Yard with a flourish hauling the first train of the day of the Market Harborough 150 celebrations. It was due to go to Nuneaton, Hinckley, Leicester,Melton Mowbray, Corby, Kettering and then Market Harborough (17/9/00).

24 - There are no spare places available by the fence near West Bridge, as recently built A1 pacific, 60163 “Tornado” restarts “The Cathedrals Express” towards Euston past the assembled “gricers” (11/12/10).

25 - 6233 “Duchess of Sutherland” makes an impressive exit past Martin’s Yard on the return working of “The Mancunian” railtour to Manchester Piccadilly (9/7/04).

26 - All Saints Church bells ring out over Northampton town centre during a November evening in 1983.

1 - It is the inaugural day of Network South East and in celebration BR have allocated a rake of first class carriages for all passengers to use on the Northampton to Euston service. 86 226 “Royal Mail Midlands” stands at the head of the rake and once given the right away accelerates across Foot Meadow and “fifteen arches” into Hunsbury Hill tunnel (21/6/86).

3 - In direct contrast to track 2 a 1977 built HST and one of the most successful diesel multiple unit designs in the world is reined in as it approaches West Bridge on a Euston-Holyhead express. A class 87 then passes south (21/8/95).

4 - A festive atmosphere is prevalent as passengers and jealous onlookers await the arrival of the Orient Express Pullman train on Sunday 15/3/87. The station announcer is busy as 86 233 “Laurence Olivier” and 81 006 head an empty newspaper train through the centre road after which Long Buckby Silver Band strike up for the arrival of 86 235 “Novelty” with the famous train.

6 - Passengers wait excitedly on platform 1 as Deltic loco D9000 “Royal Scots Grey” roars into Northampton just as she did at stations such as Peterborough or Doncaster many years ago when in BR service. Once loaded up D9000 departs to Chester and Wrexham with “The Welsh Marches Express” (27/3/99).

7 - No CD of Northampton railway sounds would be complete without including an example of the latest form of traction, namely the Siemens Desiro units. They do not make very much noise as is illustrated by this track of Stanier pacific 6201 “Princess Elizabeth” accelerating through platform 1 with the return leg of “The Midlander” . No sooner has she passed then a Birmingham bound Desiro departs from platform 2 thereby allowing a direct contrast between old and new (17/7/10).

10 - On a dark Monday evening in October, the main line has been diverted and 47 254 on a loaded ballast train has been brought to a stand at RY 1022 resulting in all expresses running non stop through platform 1 - something quite rare. Finally, during a lull in the passenger traffic the 47 is given the green light and accelerates away southwards, the wagons screeching in the confined space under West Bridge (14/10/85).

14 - A long lie in - It is 10.00 am and well past the normal time for the Inverness to Euston sleeping car train to be traversing the County but the rail system was in chaos after the Hatfield derailment and severe speed restrictions and diversions were put in place. After 90 035 has passed south an 87 rumbles an express northbound under West Bridge (18/11/00).

15 - Industrial action by Silverlink staff the day before has left stock in the wrong place as this telephone call by a driver to Rugby power signal box shows. The four coaches of a class 321 unit are eventually coupled up to four others in platform 1 and the train then departs for Euston. Recording on board was from a first class seat next to the rear cab - courtesy of the guard !!! (3/11/07).

17 - 37 410 blasts away from West Bridge amid a cacophony of firework noise on the return leg of the first Silverlink Swansong railtours which travelled over the lines covered by the company (3/11/07).

19 - Black 5, 45 305 returns the “Capital Five” rail tour to Tyseley by travelling, rather unusually, round the back via platform 3 as 66 143 passes south with a pw train complete with a “flat” or two. The sounds of fireworks and emergency sirens are also heard in the cold night air (6/11/10).

20 - Prior to the arrival of Black 5, 45305 on the outward working of the “Capital Five” rail tour, 67 008 powers the “Northern Belle” south through the centre road with 67 025 on the rear. 45305 then arrives on platform 1 bound for Euston - apart from the station announcer the sound could easily have been from 50 years ago with the distinctive click clicking of the locomotive’s motion as it pulls to a stand. The tour eventually departs southwards under West Bridge (6/11/10).

22 - Super power in the form of ex-LMS pacific 6233 “Duchess of Sutherland”, which was a regular visitor to Northampton 50 years ago, powers out of platform 1 and into the night with another “Cathedrals Express” working to Euston (9/10/10).

23 - And now for something completely different - Signal box sounds can be heard as Peckett 0-4-0 saddle tank, number 2104, departs from Pitsford and Brampton station on the Northampton to Lamport Railway for a trip along what remains of the old Northampton to Market Harborough line (28/5/11).

24 - As a contrast to the sound of 6233 on track 22, ex GWR Castle, 5043 “Earl of Mount Edgcumbe”, makes a typically spirited departure south under West Bridge in glorious May sunshine with “The Great Western Midlander“ rail tour from Tyseley to Euston (21/5/11).

25 - On a cold December night, BR Standard pacific 70000 “Britannia“ departs from platform 1 and slips slightly under West Bridge. Once sure of her footing she powers past and up to Hunsbury Hill and eventually Euston with the return working of “The Cathedrals Express” from Chester. Note the arrival of taxis behind the microphone - 30 seconds earlier and they would have ruined the recording ! (3/12/11).

26 - Between 30 to 40 enthusiasts watch in awe as Princess Class 6201 “Princess Elizabeth” glides under West Bridge and accelerates up to Hunsbury Hill with the “Coronation Golden Jubilee”. Despite the number present there is very little talking as the sound of 6201’s exhaust echoes back from the climb evoking memories of long ago…….. (2/6/03).