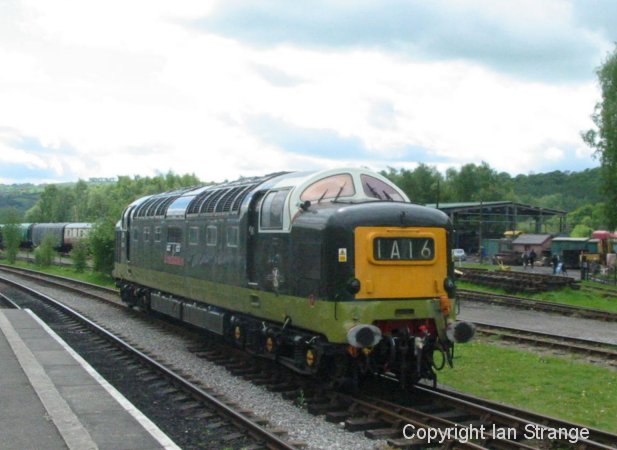 Deltic number D9016 (55016), "Gordon Highlander" appeared to be safe from scrapping as early as the late 1970s, but then almost did not make it. Since then, it has had an eventful life into, and during, preservation in private ownership.

The Deltic Preservation Society (DPS) formed in 1977 and at an early stage they ear-marked Deltic 16 as their preferred loco to save for preservation. Their reasoning was that this Deltic had gone through a "heavy general repair". This was an extensive bodywork restoration carried out in 1976 intended to extend its projected life. Only a few other Deltics had this work, but none of them had such extensive repairs, partly because plans for the Deltic fleet's demise were brought forward.

Deltic 16 made it to within a few days of the fleet demise, in December 1981, ending its career suffering a fire. This damage caused the DPS to change their choice of preservation candidate, and it looked like no.16 was doomed. Meanwhile, the Deltic 9000 Fund had formed to save the pioneer production Deltic, D9000. Their rapid success was enough for them to pick out another Deltic from the scrap-line to purchase for spares, and Deltic 16 was taken off deathrow. When they got their second Deltic, they found that the old fire damage was quite minor, and (no surprises), they decided to restore it back to running order. The fund's talented chief engineer, Chris Wayman, took charge of that project and by 1985, Gordon Highlander was roaring again. It ran regularly on the Nene Valley Railway until 1988, after which it toured a few other preserved railway diesel galas.

In 1989, it went to Doncaster Works for attention to its bodywork and a repaint into original two-tone green livery, after which it toured a few preserved railways with D9000. By 1993, privatisation of the national railway network permitted the Deltic 9000 Fund to make plans for main-line running for D9000, with no.16 as a potential donor of parts if necessary. Apart from D9000's exhaust fire on its debut tour (1996), it developed a perfect reputation for availability and reliability, again with Chris Wayman heading the engineering side of the operation. The owners became known as Deltic 9000 Locomotives Limited (DNLL).

Success for D9000, not only on railtours, but workings for VSOE British Pullman specials, resulted in a deal between VSOE and DNLL to have Deltic 16 overhauled for the main line, primarily for Pullman services. D9000 towed D9016 to Brush works in Loughborough for work to begin. Sadly, the deal with VSOE fell through.

Meanwhile, D9000 was making a name for itself hauling normal scheduled passenger service trains. Not only hauling them, but maintaining its perfect record for availability and reliability. And even setting some journey time records. Most of these were with Virgin Trains, plus some for Anglia Railways. This success promoted a new deal for Deltic 16: Porterbrook Leasing, owner of the rolling stock/locos operated by Virgin, decided to finance this Deltic's main line overhaul. The plan was to run Deltic 16 on Virgin services 6 days per week starting in late 1999.

I had been enjoying some cab rides in D9000, making sound recordings. As a major bonus, Chris was going to get me into Toton Depot to sound record D9016 being loadbank tested. Sadly, Chris and DNLL parted company in September '99. Meanwhile, 9016 re-emerged in Porterbrook purple and grey livery. It also had modern wipac lights installed on the nose ends, which required the removal of the original tail-lights and their cowling, plus the headboard brackets. Typical of the enthusiast movement, there was far more concern expressed about the livery, than the bodywork mods! Remember folks, a livery is not for life!

9016 did not have the loadbank test, and its main line test run was delayed. When it did take place, it suffered an exhaust fire, and extinguishing foam entered one of the engines causing some damage. Thus, Deltic 16 was sidelined. Under the deal with Porterbrook, they also became the loco's third owner, because there was little prospect of recovering their investment.

The poorly engine was sent to Paxman Diesels, who were still overhauling marine Deltics at that time. But with little or no compatibility between marine and rail versions, it took until 2002 to get this poor Deltic loco up and running again. DNLL chairman Michael Timms was always one for making things happen, and he got a new deal with Porterbrook, to enable them to recover ownership if and when the Deltic generated sufficient hiring revenue.

9016 made its debut railtour in April 2002 and went on to perform a few more in subsequent months, but not without a few technical problems. One driver reported erratic power surges, causing over-load tripping of the transmission. When the control-cubicals were opened up, the huge sparks went right passed the driver! By early 2003, Timms managed to entice Chris Wayman back, just two days before a series of workings for VSOE, for luxury Pullmans. The first of these travelled from London to York, but just before the return departure, orders came from a high authority to remove the Deltic and quarantine it in Doncaster! 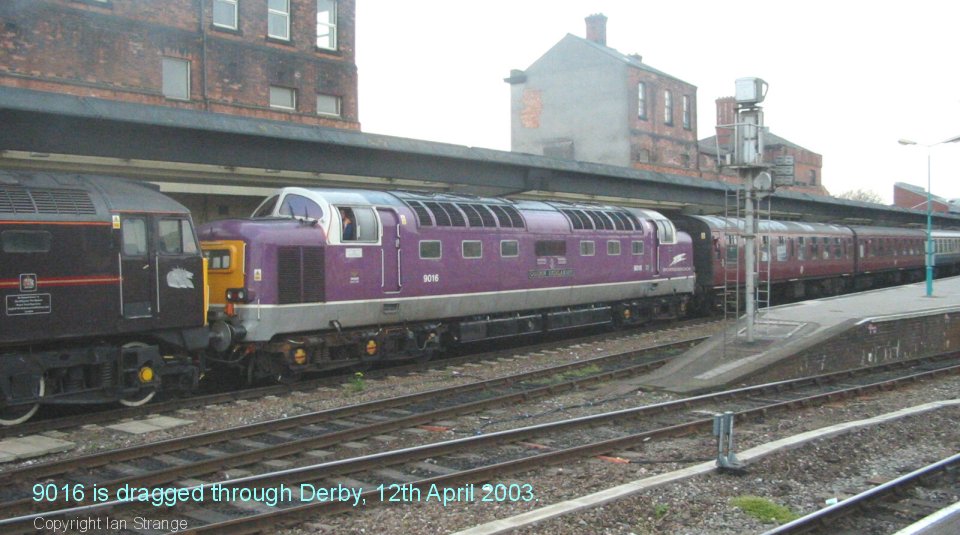 When (eventually) out of quarantine, Chris set about working through the many minor faults and rectifying them, although an ETH supply fault proved elusive. In April 2003, it hauled a railtour, but the lack of carriage heating resulted in the loco being declared a "failure" for the return leg. Ironically, the day warmed up and nobody needed heating for the return leg, when a class 47 took over! In June 2003, the DPS ran a tour with Deltic 55019 into Kings Cross. 9016 was rostered to do the ECS move out of Kings Cross, as a surprise to the railtour passengers. But it nearly didn't make it. The traction inspector, expected the loco to be in a poor state until he saw the work that had been completed. During its light-engine move, it got delayed by a signal because it was mistakenly believed to be still in quarantine. The confusion got sorted out, and the "Purple Monster" (as some called it) took enthusiasts in Kings Cross by surprise as it backed onto the rear of their railtour.

Deltic 16 spent the summer based at the Mid Hants Railway, and it got some regular turns assisting with some steam specials on the main line running to the West Country. The Deltic would haul the special train over the Mid Hants, early in the morning, driven by Chris. Then it would take the empty stock on the main line ready for the steam engine to take over. On one occasion, it did a full tour, taking in the steep bank at Exeter. As a major bonus, it was also hired to move preserved stock to Doncaster for a special open weekend. This meant a night time assault on Stoke Bank (and I missed getting a recording... aarrgh!).

During this period, there were concerns about coolant appearing in the lubricating oil on one engine. Retired Napier/Paxman Deltic engineer, Mike Baker, over-saw this problem and monitored it. By late summer, a cracked cylinder-liner was suspected, and running had to cease again. Unfortunately, D9000 had already been sidelined with main generator trouble, and with no locomotive hiring income, DNLL went bust. 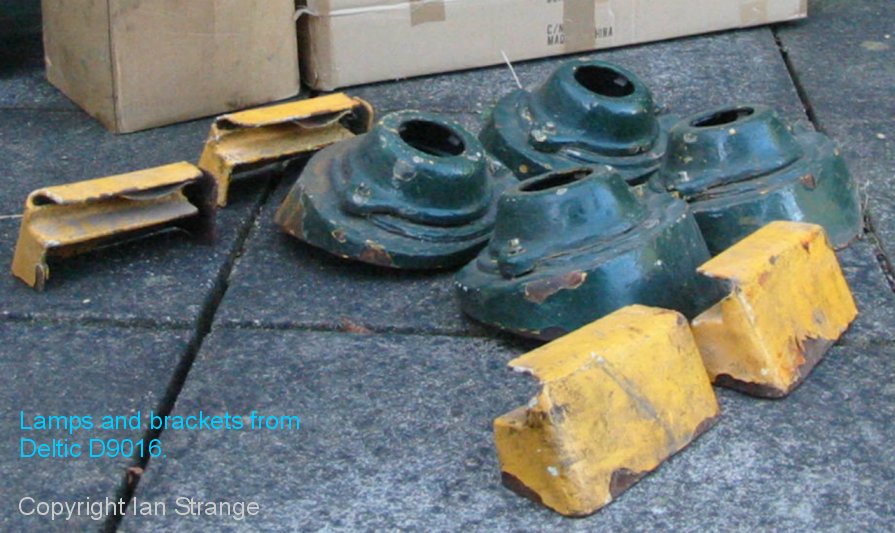 Porterbrook sold their Deltic to a private individual who moved it to Peak Rail in Derbyshire, and brought in Chris to look after it. Oddly enough, Deltic 16's missing tail-light assemblies and headboard brackets came up for sale on ebay, but failed to sell. It seemed a pity not to get the original parts back on this loco, and so I recovered them at a time that I was researching and measuring Deltics for a model loco project. I took my measurements before letting the Deltic's owner take the parts over and have them welded back on. To the relief of many, Deltic 16 had already turned from purple back to green! 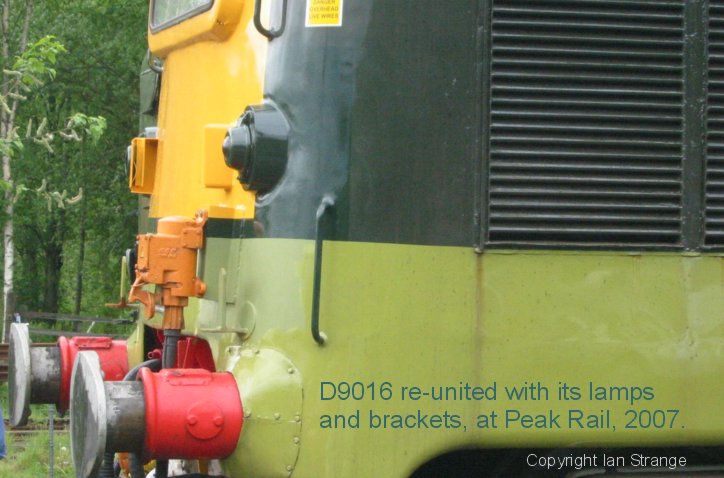 Although plans seemed to be in hand to do various engineering jobs on the loco, after it had pottered around at Peak Rail, it was suddenly sold to owner number 5 in 2008. It found itself with Harry Needle, and immediately in a spot of controversy: It was announced that it would be scrapped after selling off its bogies and power-units! Whatever you believe about that story, it ended up being saved by owner number 6, Direct Rail Services (DRS). After little action, it changed hands again, to Martin Walker, already the third owner of D9000, now in its later guise as 55022. Deltic 16 then donated its good engine to 55022, which was running on the main line on railtours.

Deltic 16 has since done the rounds of preserved line running, as seen below visiting the Great Central Railway in 2014.

2017 update
As of November 2017, this article should really be called "8 owners from new"! 55016 (and 55022) have changed hands, to Locomotive Services Limited. They will support/compliment the Icons of Steam fleet of mainline certified steam locos.