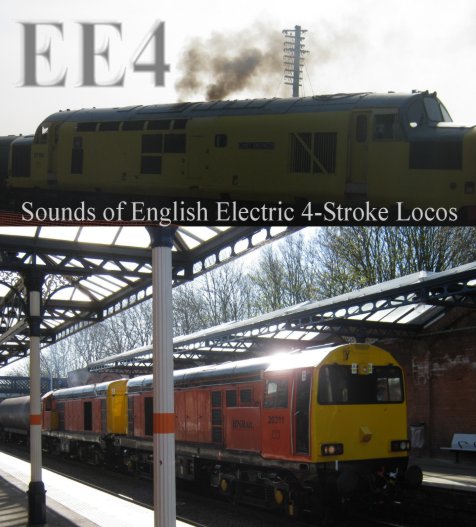 Highlights include:
** A lovely, long sequence of 4 class 20s at Melton Mowbray collecting new LUL stock from the Old Dalby test track.
** Nostalgic sounds of an 09 shunting back in 1983.
** Action from the GCR and SVR galas.
** 37s thrashing away on railtours including another assault on the Lickey.

You can download a pdf version of the playlist:
EE4 playlist PDF

1) At 0853, rail staff awaiting the approaching train can be heard chatting. 20311/314 (with 20905/901 - in GBRf livery - at the rear) arrive from Peterborough with 2 barrier wagons, pausing half way along platform 2. They then draw forward (see front cover lower photo) to the platform end, pause, and accelerate westwards. They stop beyond the cross-over. 20311/314 then propel the train over the cross-over, through the station and into the loop. 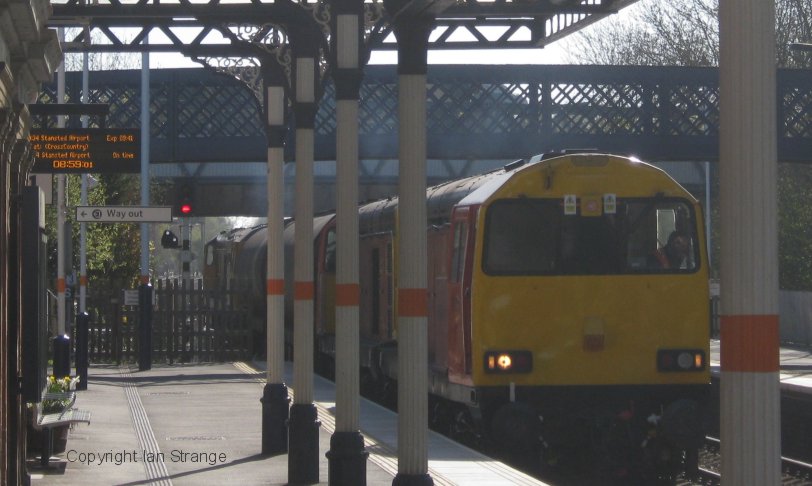 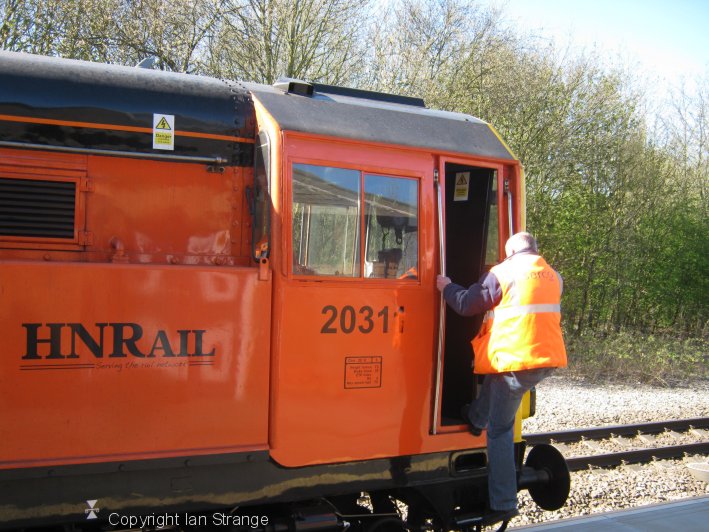 3) At 1221hrs, 20901/905 return from Old Dalby with new S type London Underground stock. The driver nods approval to the sound recordist and then pauses the train in the station (platform 1) to drop someone off. Then the 20s blast out and into the loop (plenty of passengers getting deafened!). 20314/311 bring up at the rear. 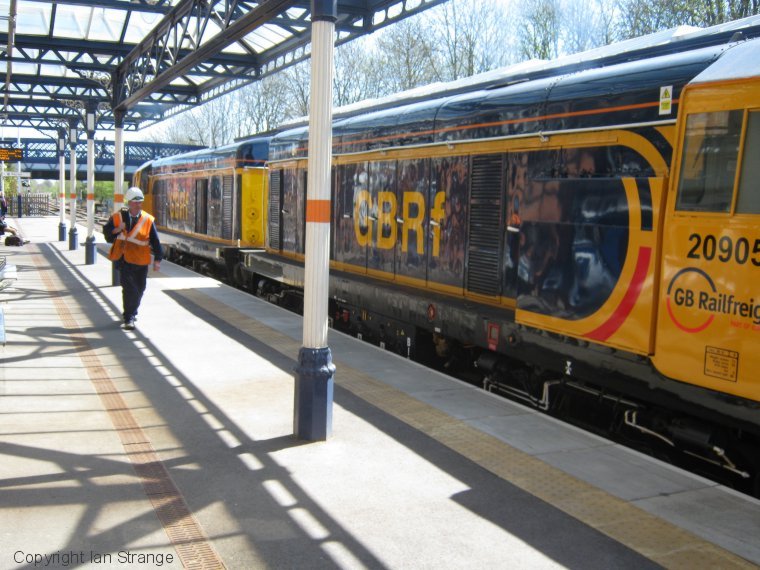 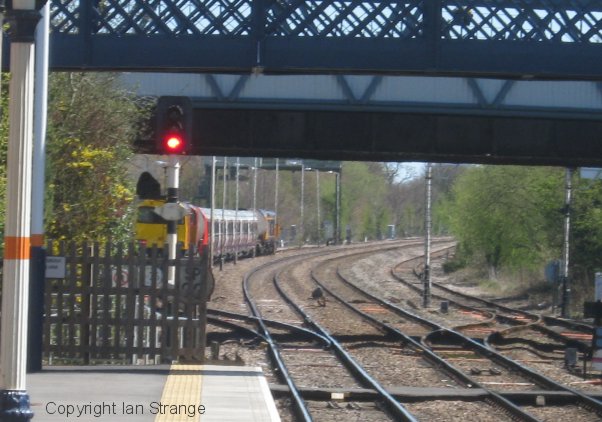 4) At 1238, 20311/314 depart the loop and pass platform 1 westwards with 20905/901 at the rear, passing over the cross-over. A rear loco toots when clear of the junction and the front locos open up, and you can hear the ground signal. They were heading for West Ruislip. 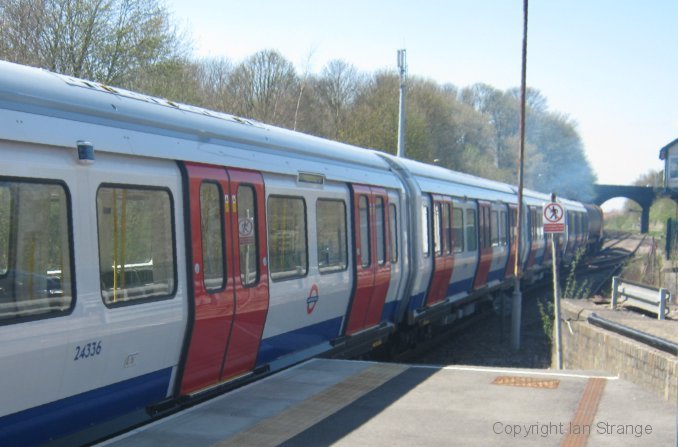 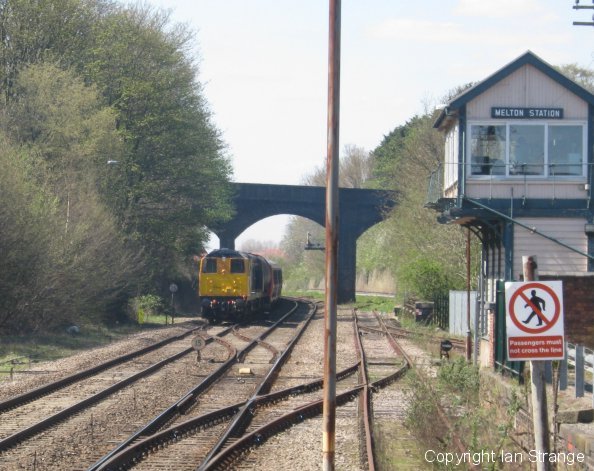 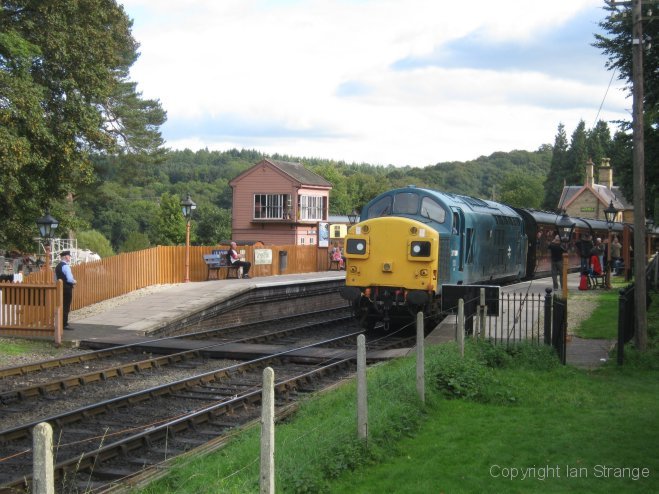 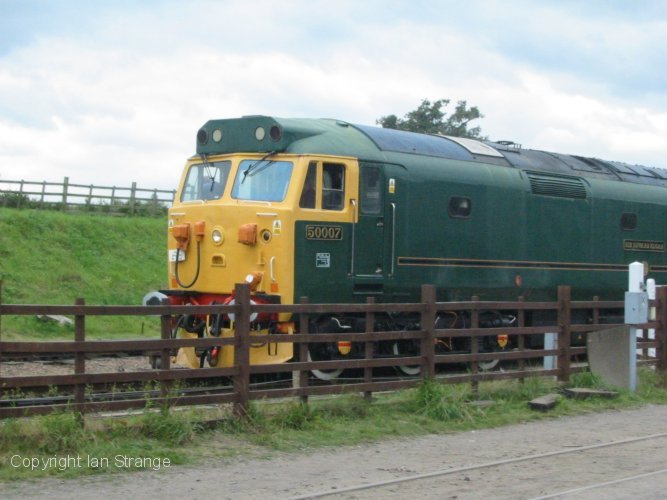 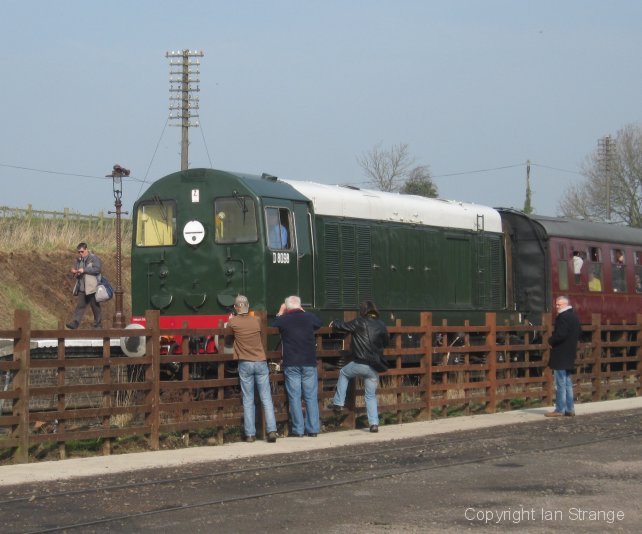 16) At 1333hrs, D5830 runs light out of the head-shunt and accelerates north through the station. 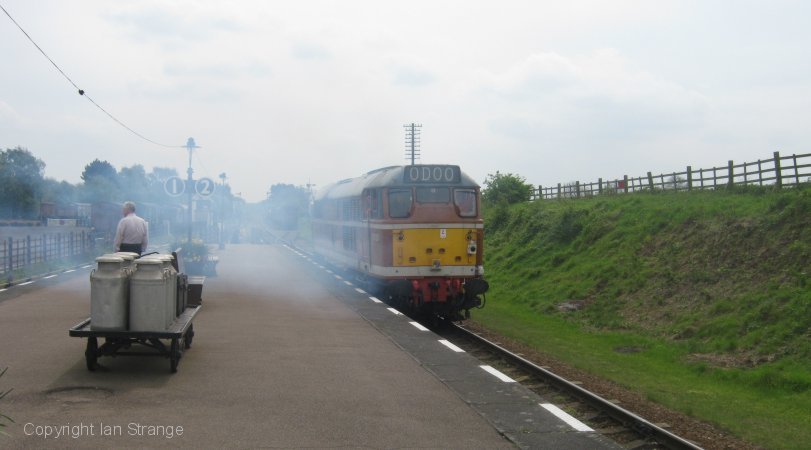 17) 50031 on the 1118 Bridgnorth-Kidderminster, accelerates in the distance from Bewdley, opening up again as it passes. 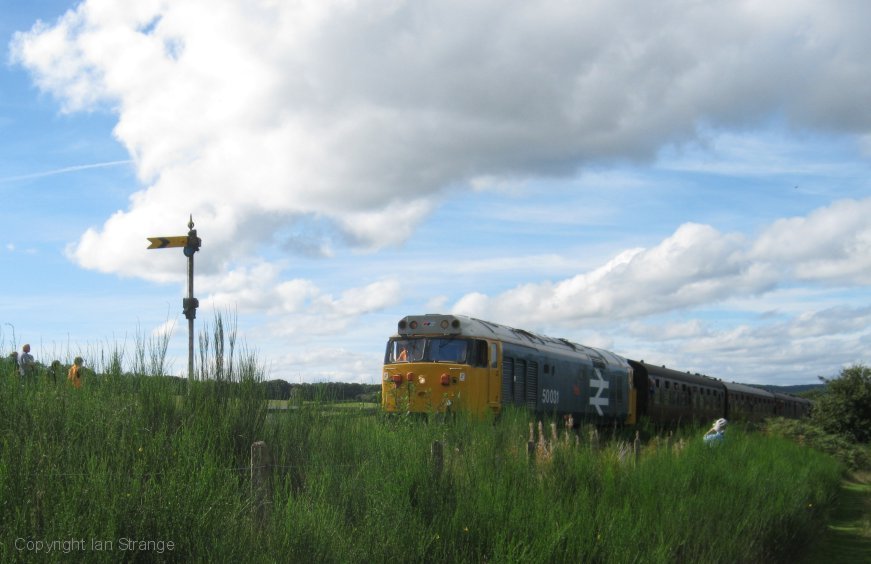 b) Recorded from platform 1, the class 40 idles. 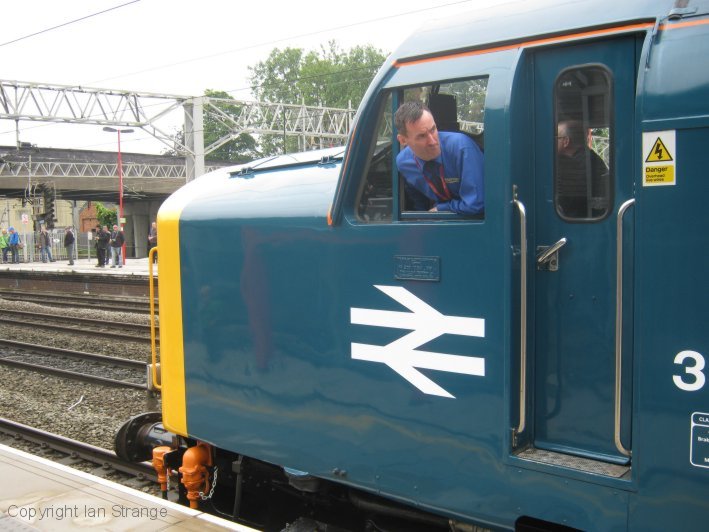 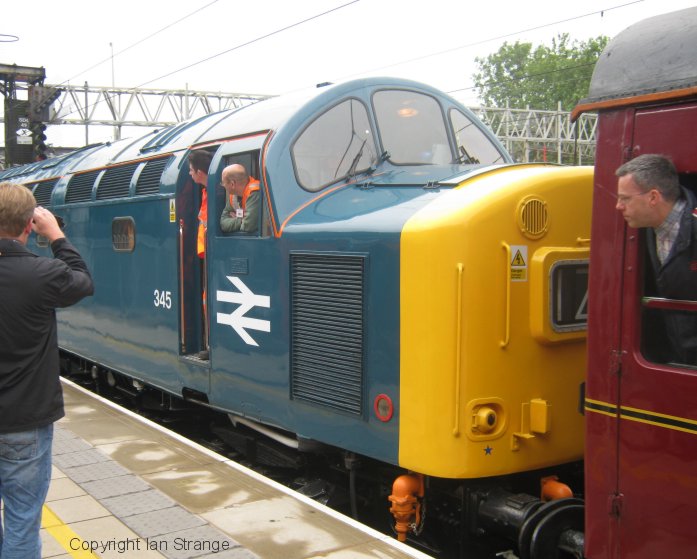 20) A cold northerly breeze carries the sound of 20312/308 approaching. As they get closer, the ground starts to vibrate before they finally pass by at 0942hrs (47802 idling at rear). The train is Retro Railtours "Retro Welsh Dragon" from Huddersfield to Swansea.

21a) 37409 opens up in the distance near Rugby as it approaches.
b) 37409 coasts by under the bridge (37609 dead at rear) at 1204hrs stopping briefly at the signal for the terminal entrance. 37409 opens up and enters terminal, its sound echoing off terminal buildings. The train is Pathfinder's railtour "The Clay Box".
22) At 1229hrs, 37609 departs the terminal, easing over the cross-over before accelerating passed and under the bridge and into the distance (as 2 Pendolinos pass each other on the main line in the background). 37409 had been removed from the train. 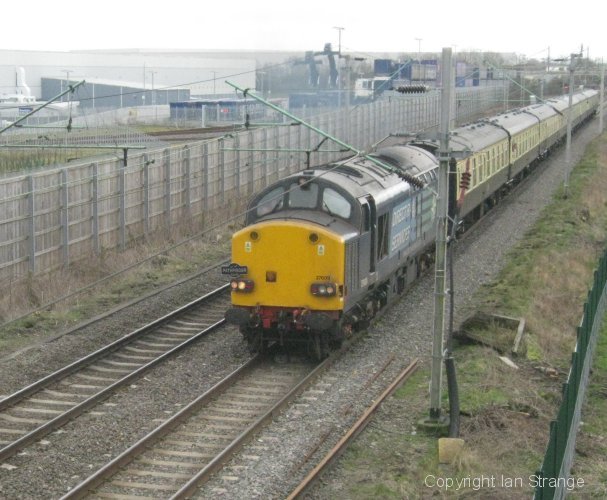 24) A Grand Central HST passes by southbound at 2006hrs. The "Retro Fenland Explorer" (by Retro Tours, returning from Great Yarmouth to Crewe) hauled by 37423/605 passes on the down fast at 2007hrs. 47501 was dead at rear. The 37s can be heard charging way into the distance, with the faint sounds of combined-harvesters hard at work in the background. You can also hear crickets in the long grass.

25) With the morning sun shining, and field mist gradually disappearing, a peacock calls out in the distance. "The Pennine & North Eastern Express" (by Compass Tours) is heard approaching before it has even passed Bromsgrove (the southerly wind carrying the sound). After a sprinter descends the hill, 37607/605 shake up the ground and storm passed at 0719hrs with a rake of red air-con mk.II coaches, travelling from Worcester to Durham.