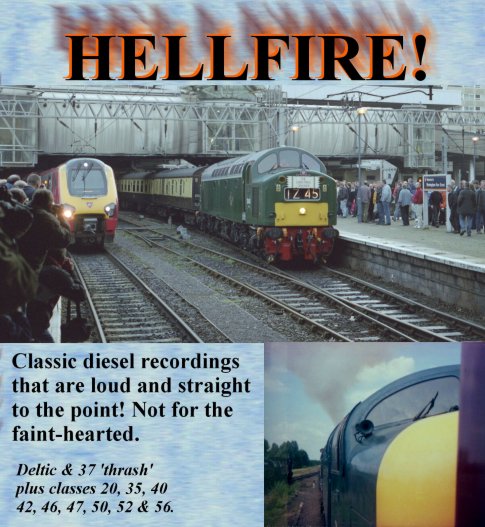 Loud and straight to the point! Classic diesel sounds that will get your furniture on the move!

The loudest highlights taken from my other diesel CDs (plus a few from my "Engines On Audio" title).

NOTE: All recordings on this CD also feature on other CDs in my range.

1 - D345’s main line return on a railtour to Holyhead, "The Christmas Cracker". It launches its train out of Birmingham New Street (30th November 2002). 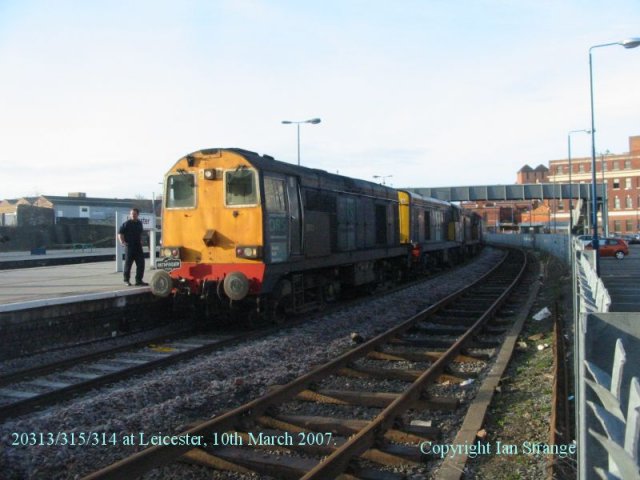 4 - *37401 departs for Holyhead at 1423. Apparent brake trouble on the old mark 2a coaches brings us to a halt just inside the tunnel. The 37 has a brief tug-of-war with the train brakes before making a rousing standing start through the long tunnel (12th December 1998).

7 - *37906 pulls away from Summerseat and demonstrates what Britain's loudest loco sounds like in a tunnel, shooting flames from its exhaust!

11 - Some road traffic is heard on the bridge at Quorn, as Deltic D9019 returning north, passes through the station and erupts from under the bridge. (21st May 1995).

12 - 46023 makes a spirited start at 0053hrs on a southbound passenger and Royal Mail working. This sound is briefly interrupted by 31145 screaming through at remarkably high speed, on a northbound parcels. Grantham (23rd June 1983). PMONO

14 - *D9000 departs Euston at 1145 with a 13 coach train. Then signals slow progress - the gradient almost bringing the train to a halt short of a red signal. “Royal Scots Grey” heaves the train forwards, the signal changes to yellow, and once over the summit coasts until the next signal is sighted at green. The Deltic then accelerates through the tunnels. "The Cross Country Deltic" railtour (13th April 1997).

15 - Birmingham New Street. After uncoupling, D9000 moves a few feet, stops, then nearly over-loads the recording equipment blasting down to the platform end. The Deltic pauses to pick up one of the assistant engineers and then moves off swiftly, and photographers walk back up the platform. (1st August 1998).

16 - Birmingham New Street. 47829 belches out smoke under the footbridge, and eventually moves away swiftly after much revving, from the west end of the station. (1st July 2000).

18 - *In the driving cab of Deltic D9000 at Coventry on one of the 1998 Ramsgate-Birmingham service trains for Virgin. With only 7 minutes left to do the 10 miles to the next stop at Birmingham International, driver Mark Sommers gets our train under way pretty swiftly. The driver induces a field-divert manually by easing off slightly. 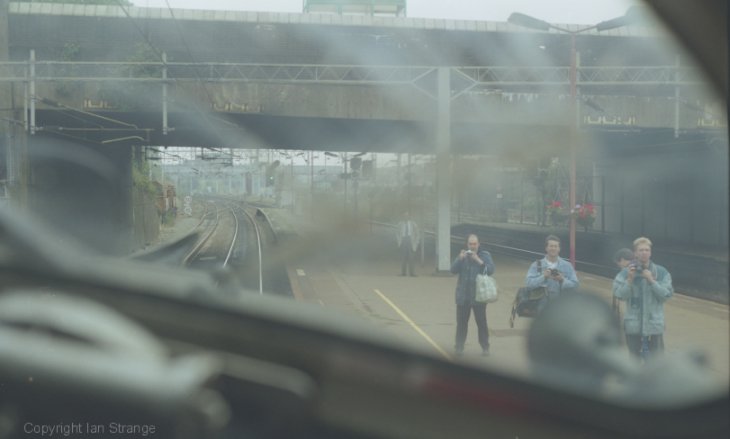 20 - *Heard from the rear driver's seat of D9000 on a Virgin service train. With the side windows open to let in more sound, Alan Bun-Clark makes a storming departure from Birmingham International heading back into Birmingham. The ammeter surges passed 2300 amps (overload would be at 2400), leaving an anxious looking engineer Chris Wayman chewing on his gloves! 0 to 60 mph is achieved in 108 seconds. Alan induces the field-diverts manually by easing off slightly at 42 and 65mph. (7th August 1999).

25 - *D9000 departs Ipswich, and driver Nigel Hutchison gives us a great blast inside the tunnel, as the revs of the trailing power unit rise and fall. An Anglia Railways service train. 11th August 2002. Apologies for the slight overload distortion.

26 - Lickey Incline, near Burcot. A woodpecker hammers in the distance. 37685/676 (West Coast Railways livery) + 57601 climb the Lickey on Spitfire Tours’ "Holy Oakes" to Holyhead, passing by at 0854 and shaking up the ground. A farmer's pick-up passes behind the mic. The 37s are then heard going into the distance, over the summit and beyond. A woodpecker gives its laughter call. (26th March 2011). SOTA

27 - The “Autumn Highlander” railtour is heard heading back to London at dusk. Deltic 55022 double-heads with 50049. The deep throbbing of the 50’s V16 engine contrasts with the high revving drone of the Deltic’s twin Napier engines. 40145 is dead at the rear of the train. The location is Holme Fen, a few miles south of Peterborough. (8th October 2007).