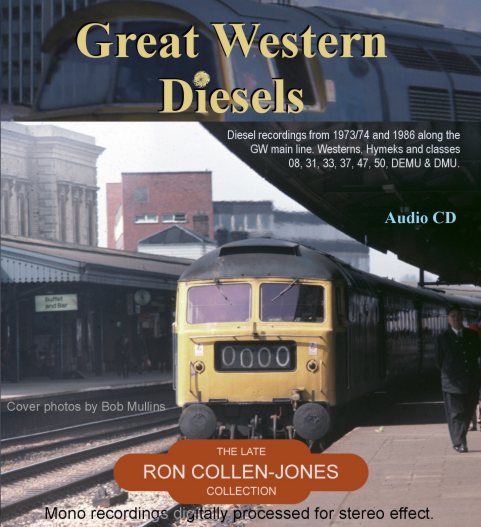 Sounds of classic diesels, mostly at Reading and Paddington.

All recordings made by the late Ron Collen-Jones. Restored and published by Ian Strange.

Highlights include:
** Intensive action at Reading during Royal Ascot week.
** A ride behind a Hymek.
** Class 50s departing and rushing through Reading.

You can download a pdf version of the playlist:
Great Western Diesels playlist PDF

Note that these recordings have been edited to remove Ron Collen-Jones' commentary (except on some on-train recordings). The information he provided is included in this play-list.

31st July 1973, at Reading:
1 - Class 47 no.1665 belts through on the slow road with the South Wales steel-liner.
2 - Pioneer class 50 no.400 storms through on the 1145 Paddington-Bristol at 1215hrs.
3 - DEMU no.1204 arrives from Tonbridge.
4a - 1069 "Western Vanguard" arrives. As announcements are made, the mic is taken passed the loco and onto the leading coach.
4b - On-train departing behind 1069, 4minutes late, on an up service. Pulling away gently at first, the driver puts down the power and we accelerate on jointed and then welded rails. This loco hums beautifully as speed gathers relentlessly. An express passes our open window.

2nd October 1973:
10 - Paddington: As a Western stands in the background, some Canada geese make a lot of noise after arriving on the Fishguard boat train.
11 - Reading: 1063 "Western Monitor" pulls forward to the next signal, on a goods train, before heading into the Southern Region.
12 - Reading: 1003 "Western Pioneer" departs on 1V55 to Plymouth.
13 - Reading: 1030 "Western Musketeer" accelerates through on a freightliner, although displaying headcode 1A63.